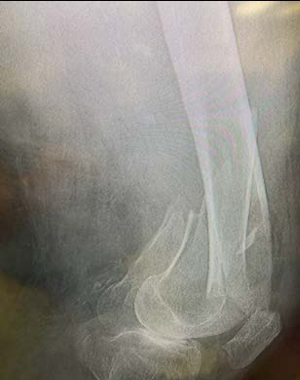 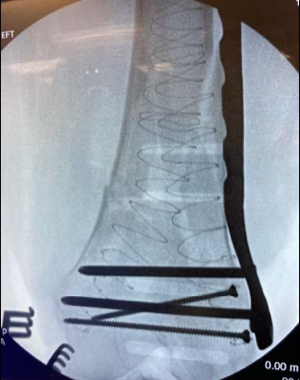 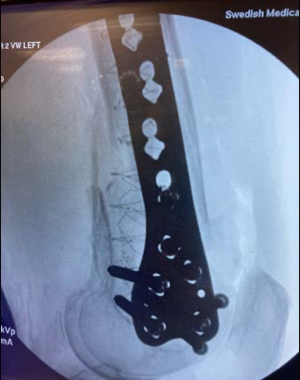 Fragility Fracture of the femur internally stabilized with 2 IlluminOss implants as a supplement to a distal lateral femoral plate. The fracture was reduced and held in preliminary position with two screws anterior and posterior to and outside of the intramedullary canal and two unicortical screws proximally. A 7.3mm cannulated drill was used to create a portal at both the medial and lateral condyles and the canal prepared for the delivery of the IlluminOss Implants with flexible reamers. 7.0 mm sheaths were introduced via the pathway and the prepared 22/13 x 220 & 240 implants were positioned under imaging and then simultaneously infused with liquid monomer, expanding the implants and filling the canal. The implants were then cured with the application of visible light. The femoral plate was positioned, screw holes drilled and screws driven bicortically through the two IlluminOss implants. The screws holding the plate were securely affixed to the IlluminOss implants rather than the severely osteoporotic bone providing a strong stable construct.