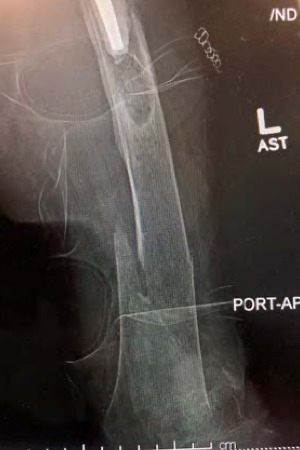 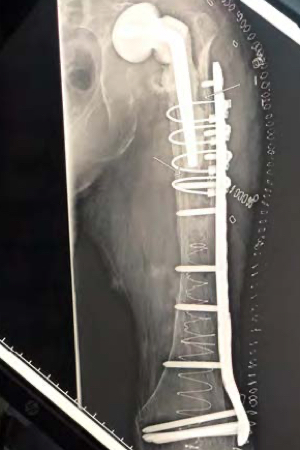 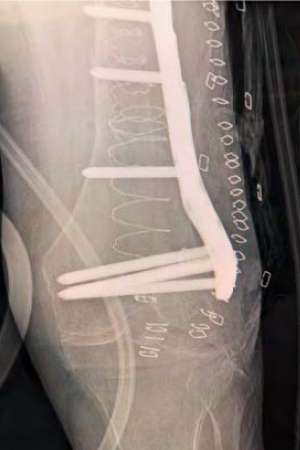 Patient sustained a distal femoral fracture below a total hip prosthesis. The bone was extremely osteoporotic complicating the procedure. The IlluminOss implant was implanted to provide both fracture stabilization as well as a means to enhance the holding power of the screws for the planned periprosthetic plate. The IlluminOss implant was inserted into the intramedullary canal through the center of the femur via the knee joint with an awl and the canal was prepared. A 7mm introducer sheath was positioned within the medullary canal. The implant was prepared and delivered into the canal and then filled and expanded with liquid monomer via a 20cc syringe. With the balloon filled, and the fracture reduced and held in position, the implant was cured with visible blue light.

The locking plate was then positioned to further stabilize the fracture. Screws for the locking plate were inserted into the cured IlluminOss implant below the stem of the hip prosthesis. The pull out strength of screws inserted into the IlluminOss implant are increased 3 -5 times over normal bone*, and the surgeon confirmed that he had outstanding screw purchase. Cerclage wires were used proximally to further stabilize the plate near the hip prosthesis.