Fibula for a TriMalleolar Fracture

Back to Posts
Indications: Fibula 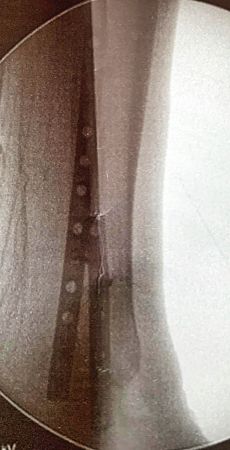 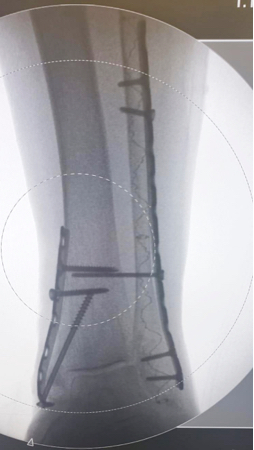 86 year old female who slipped and fell during a snowstorm and suffered a complicated trimalleolar fracture . The patient had significant multiple comorbidities, exceptionally poor soft tissue and skin conditions and highly osteoporotic bone which further complicated the repair.

The fibula was stabilized in a minimally invasive approach utilizing an IlluminOss 9mm x 160 mm implant, followed by the delivery of a 12 hole angle stable plate from distal to proximal and fixed in position by two angle stable screws The medial malleolus was treated with a cancellous plastic and an angular stable heel plate. A set screw was then inserted through the plate and IlluminOss. Postop the patient was mobilized under physiotherapeutic guidance, transferred to a wheelchair and then to successful partial weightbearing of 20kg increments The hospital stay lasted longer than planned due to the domestic situation, and the need to organization short-term care.

Six weeks post op, the adjusting screw was removed and the patient was fully load bearing